Learning the Notes on the Fingerboard

May 12, 2009
One of the best pieces of advice I received from a former instructor during my developing years was, "You need to know every note on the fingerboard." This seemed like a daunting task to say the least. But this instructor was right on! It's incredibly helpful to know the names of every fret on every string. So let's look at what it takes to accomplish this task.

To start, you must know the open strings of the guitar. From strings 6 (lowest) to 1 (highest) the notes are as follows: E, A, D, G, B, E. By memorizing these notes you now have a home base to work from for figuring out the remaining notes.

The place where sharps and flats are located is between the pairs of notes that are a whole-step apart. So, the fret between A and B is occupied by A# or Bb (these are the same note with a different name called an enharmonic equivelant).

Put it into Practice

Now that we've identified the first fret we can keep working our way up the neck. Ask yourself how far apart is F and G. This is not one of the natural half-step pairs, so we find the G two frets away from F, located on the 3rd fret. Notice we skipped over the 2nd fret, this is where F# or Gb is located.

Look at the diagram below and you will see the notes we've just figured out. Notice at the 12th fret (the grey ovals are fret markers and typically two ovals on the same fret indicates the 12th fret) you see the letter E. The 12th fret is where it starts over, this is the octave. If you've worked your way up to the 12 fret and you don't get the same letter as its open string, then you goofed up somewhere along the way. This is a great way to check your work-the 12th fret note must be the same as its open string.

Popular posts from this blog

June 23, 2009
I've had a few people request a written version of my tune Adventures of Superball . So, for those who are interested, you can download a copy here . There are two versions one for guitar and one for mandolin. This tune is on my latest CD, Open Spaces . You can purchase the track, Adventures of Superball and the rest of the CD below. Have fun with it!
Read more 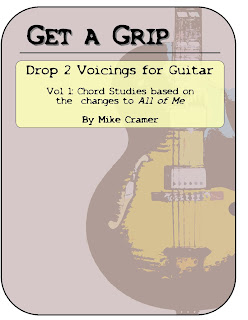 I'm excited to tell everyone about my new instructional book, Get a Grip: Drop 2 Voicings for Guitar . If you're looking to gain a deeper understanding of chords and increase your chord vocabulary this book can help. The first section of the book presents the theory behind the Drop 2 concept along with several diagrams for 7th, 9th, and 13th chords. The second section applies the theory by presenting several ways to voice the chords to the jazz standard All of Me . Topics covered: Drop 2 Voicings Voice Leading Chord diagrams on multiple string groups 9th and 13th chords Multiple voicing options for the jazz standard All of Me The book is available as an instant download. This ebook is a pdf, so you will need the Adobe Reader or any other pdf viewer. Price: $10.00 view sample
Read more

October 19, 2009
If you've ever found yourself searching for a way to harmonically spice up your folk and pop based tunes then check out Sus2 and Sus4 chords. They are versatile, easy to play, and harmonically satisfying. What are Sus2 and Sus4 Chords? The sus stands for a suspension. The formula for a sus2 is [1 2 5] and the formula for the sus4 is [1 4 5]. Notice that neither chord contains the 3rd, that's because it's replaced by the 2nd (sus2) or the 4th (sus4). Playing Sus Chords on the Guitar The easiest way to learn sus voicings is by altering your triad voicings. For a usesful reference sheet on triads visit my post on triads . All you need to do is find the 3rd of your chord voicing and replace it with either the 2nd or the 4th, depending on which sus voicing you are creating. That's all there is to it! Sus Voicings Handout -click to download
Read more